Bon Appetit hailed it as the Best New Restaurant in the US…. accolades have been streaming ever since. It is not all hype, the food is amazing, creative and interesting. Husk is the newest offering from James Beard Award-winning Chef Sean Brock of McCrady’s and the Neighborhood Dining Group. He transforms the essence of Southern food. 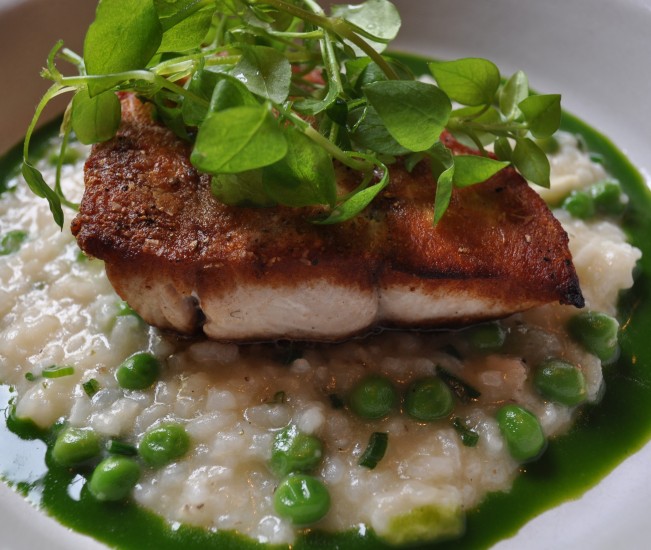 Rudderfish with Rice Grits and Peas

Led by Brock and Chef de Cuisine Travis Grimes, a Lowcountry native, the kitchen reinterprets the bounty of the surrounding area, exploring an ingredient-driven cuisine that begins in the rediscovery of heirloom products and redefines what it means to cook and eat in Charleston. 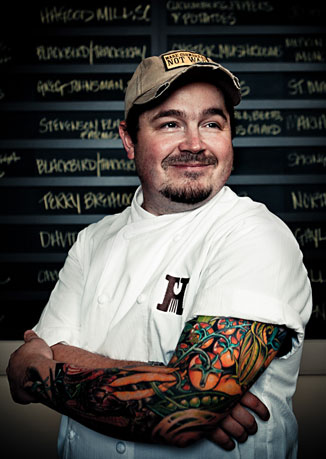 Starting with a larder of ingredients indigenous to the South, and set within a building complex dating to the late 19th century, Brock crafts menus throughout the day, responding to what local purveyors are supplying the kitchen at any given moment. The entrance beckons with a rustic wall of firewood to fuel the wood-fired oven and a large chalkboard listing artisanal products currently provisioning the kitchen, but like the décor that inhabits the historic building, the food is modern in style and interpretation.

At Husk there are some rules about what can go on the plate. “If it doesn’t come from the South, it’s not coming through the door,” says Brock, who has even stricken olive oil from the kitchen. As he explains, the resulting cuisine “is not about rediscovering Southern cooking, but exploring the reality of Southern food.” This modern approach results in playful dishes such as Deviled Eggs with Pickled Okra and Trout Roe, and new classics like South Carolina Shrimp and Chopped Okra Stew with Carolina Gold Rice and Flowering Basil. 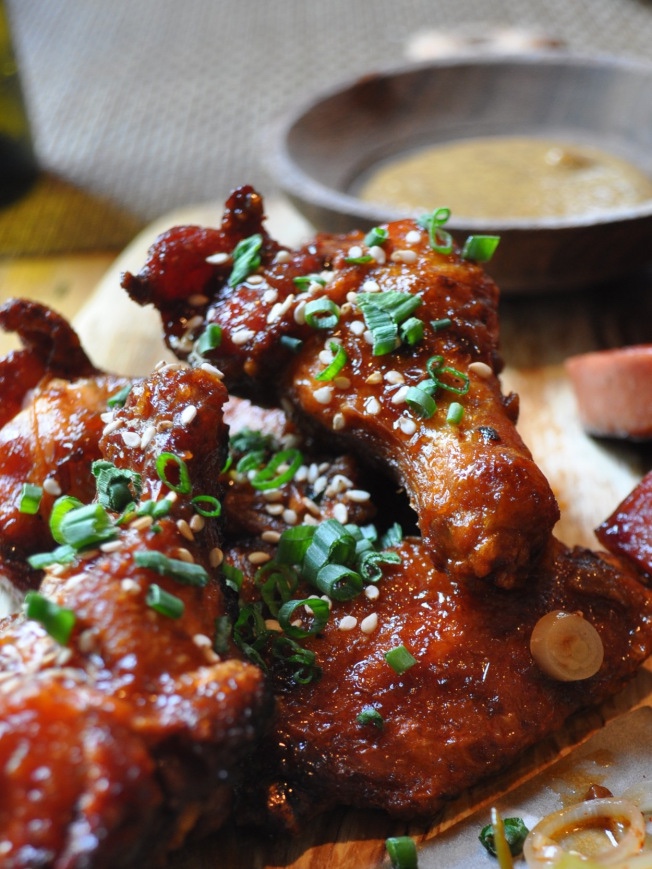 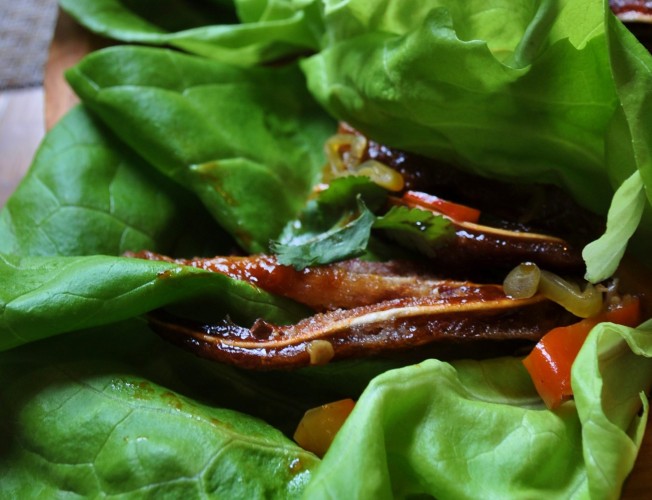 Seed-saving, heirloom husbandry, and in-house pickling and charcuterie efforts by the culinary team are the basis of the cuisine at Husk. The restaurant is as casual as it is chic, evoking a way of life centered on seasonality and the grand traditions of Charleston life—one lived at a slower pace, preferably with a cocktail and a wide porch in the late afternoon. It is a neighborhood gathering place for friends, and a destination dining spot for travelers, with a little bite of the South for everyone’s palates. 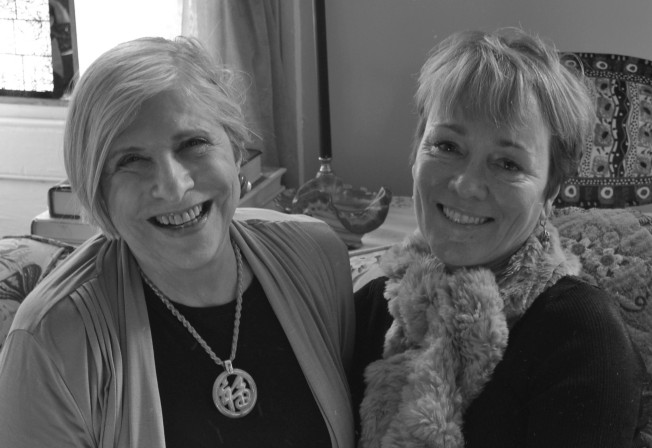 These photos are from my lunch there with Nathalie Dupree and Holly Herrick, two Charleston based friends of mine than rank in the upper echelons of Food Writers.  And so we were treated to many things that we did not order. I must say that the most amazing thing that day was totally unexpected, the fried chicken skin with honey and hot sauce. It is a dish I have reconstructed back in my home kitchen in Hawaii, within 2 days of my return. 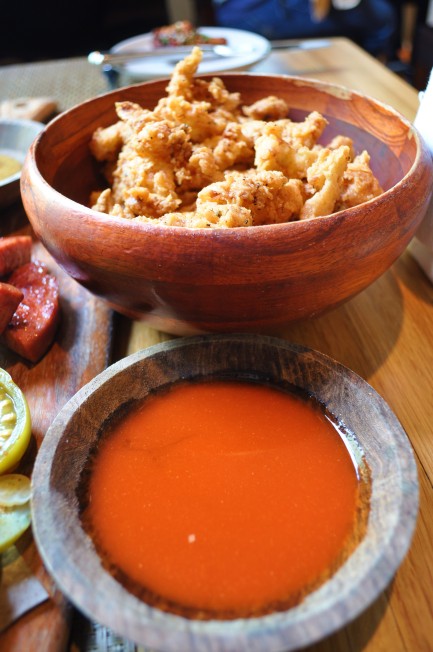 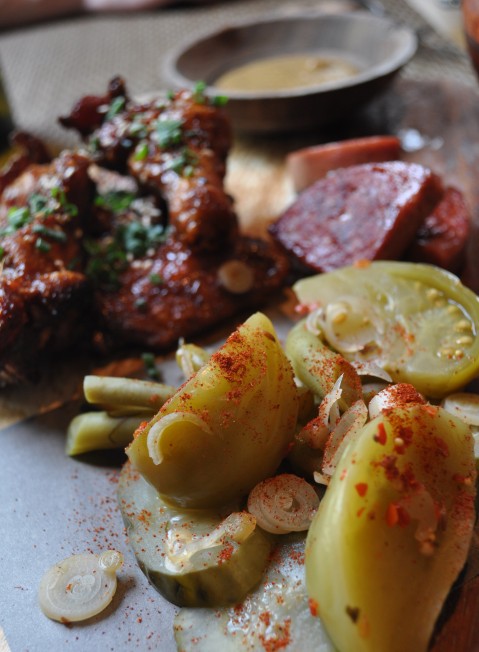 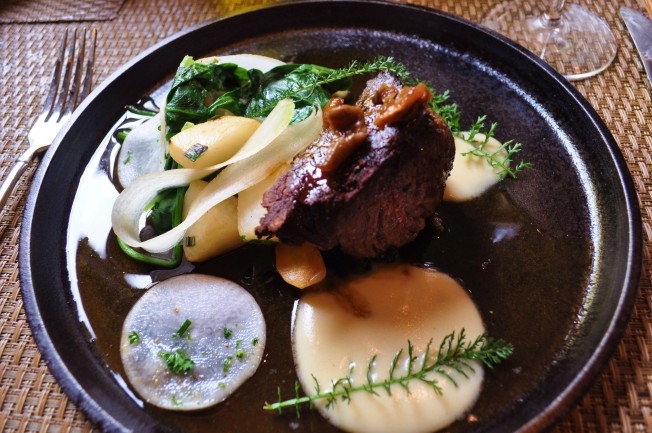 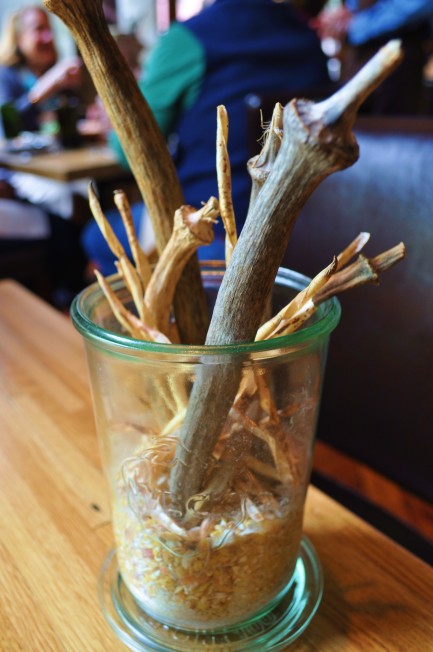 Even the centerpieces are local... dried okra pods 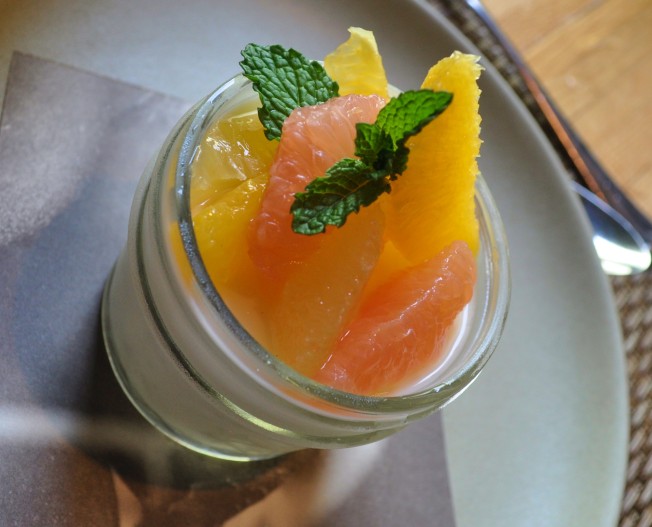 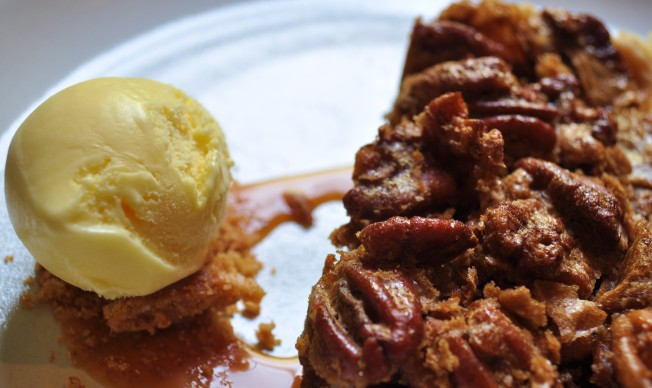 I have some sweet memories rolling around my head right now. Last weekend I found myself in the midst of several hundred foodies and fourteen amazingly generous chefs. We were at Lowndes Grove Plantation along the slow and winding Ashley River in Charleston, South Carolina. We were there for a barn raising, quite literally. Keegan Filion Farm owned by Annie and Marc Keegan supplies many of Charleston’s restaurants with free range poultry, eggs, grass fed beef and heritage Tamworth Hogs. On December 4th a young turkey knocked over a heater and the barn built in the 1930’s was consumed by fire. More than 100 turkeys died in the fire as well as turkey and hog feed, farm equipment and tools.

Chef Nico Romo of Fish Restaurant and Randall Goldman, CEO for Patrick Properties rallied the troops. A barn raising, was planned in a little less than two months. Chefs offered their services and food. Patrick Properties provided the spectacular venue and the public came in droves to taste and celebrate together. Enough money was raised at the event to build the new barn.

The food was amazing of course! Here are some pictures of the wonderful treats we were served.

From the culinary program at the Art Institute, this beautiful Foie Gras Custard with Pickled Red Onion Mousse 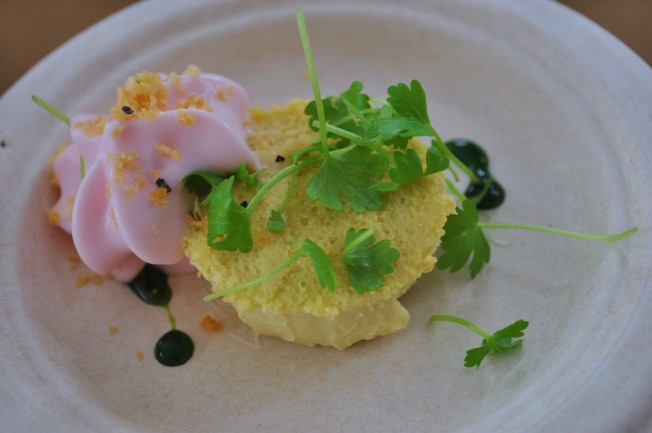 From FIG, here is yet another “play with lamb dish”, AMAZING soft pillows of gnocchi with a velvety lamb ragu. This just might be the best gnocchi I have ever tasted.
It literally melted in my mouth. Chef Mike Lata is an artist in the kitchen. I would go back to Charleston just to sit at one of his tables. 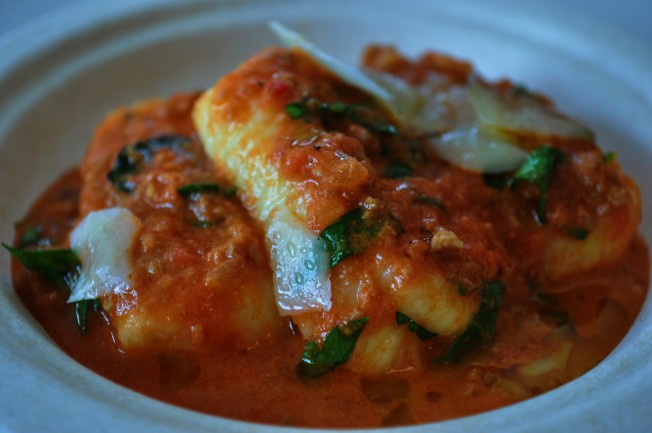 House made Charcuterie on Focaccia by Craig Deihl of Cypress 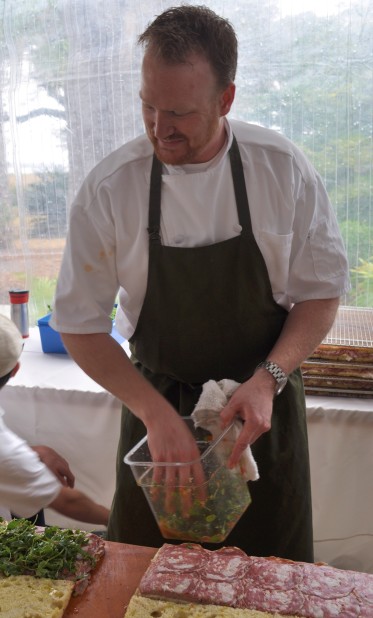 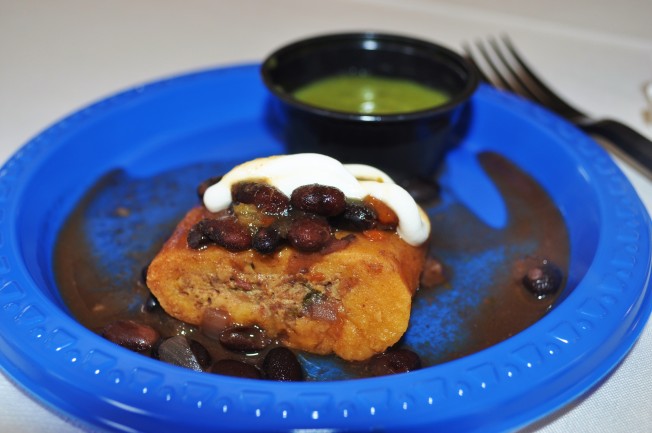 Cassoulet with house made bacon 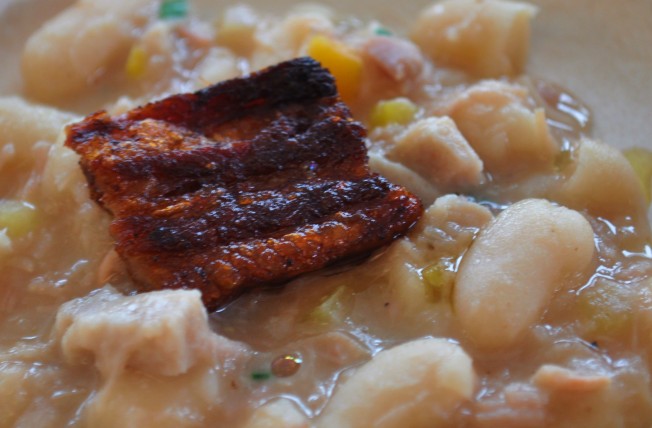 And then there were the OYSTERS! I miss oysters so much living in Hawaii. Low Country Oysters are unique and so very good that I often dream of them. 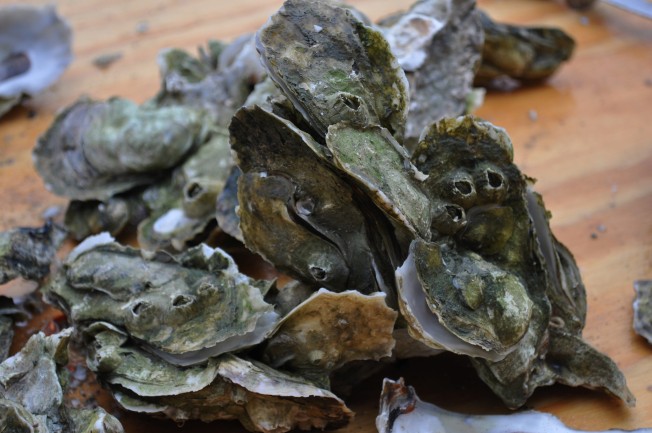 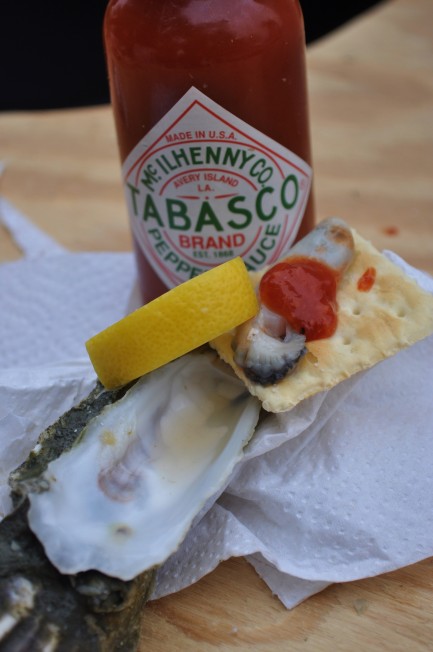 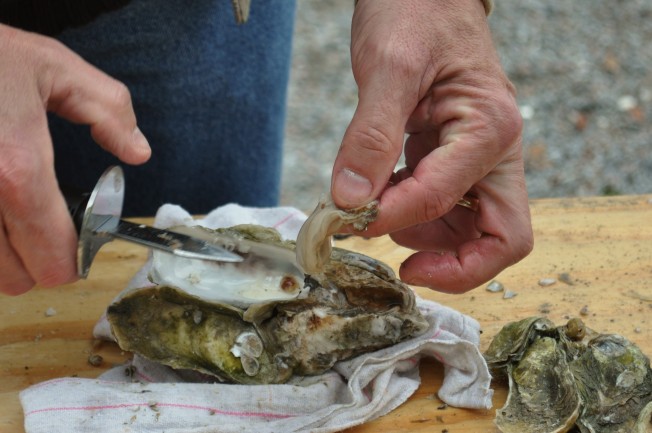 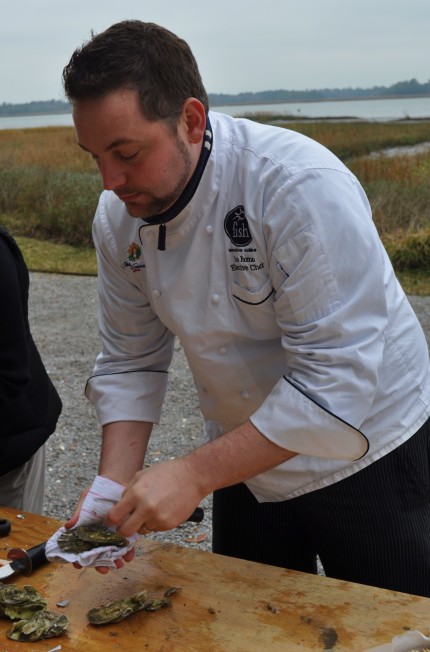 In the low country oysters are roasted, this does not mean that they are cooked… they are steamed just long enough to encourage them to open.

Big thanks to the generous chefs who at the end of Restaurant Week still found energy and gave their all to the cause:

Ahhhh… I miss the Low Country already and I have only been back in Hawaii for a few days.

And here is a shout out to my host in Charleston, Holly Herrick… it was so much fun exploring the city and dining with you. More on her soon.