I am tired of ingesting sappy sweet Maraschino Cherries loaded with red dye #40. I want some *real cherries* for my manhattans and Mai Tais! And so, I made Homemade Maraschino Cherries. There are two ways to make them (that I know of) and one of them requires sourcing  Luxardo Maraschino Liqueur .I will be posting about those soon.  If you are not looking for a spiked cherry, why not just make them the old fashioned way? Basically this involves taking fresh cherries at their peak, creating a syrup adding some spices and flavors that will compliment the cherries, then simmering the cherries lightly in the syrup without really cooking them completely. This enables the flavors of the syrup to penetrate the cherries and still retains the texture of a fresh cherry.

Which would you rather have?

Commercial Maraschino Cherries are typically made from light-colored sweet cherries such as the Royal Ann, Rainier, or Gold varieties. In their modern form, the cherries are first preserved in a brine solution usually containing sulfur dioxide and calcium chloride to bleach the fruit, then soaked in asuspension of food coloring (common red food dye, FD&C Red 40), sugar syrup, and other components. Green maraschino cherries use a mint flavoring.

This recipe is simple and can be completed in the space of an hour. When the cherries have been soaking in the syrup even longer, they will be even tastier. I did not pit the cherries and I left the stems in tact, but you can pit them if you want to. You will need a large jar or container to store the cherries in. They do need to be refrigerated. The alternative of course is to process the cherries, but then they would lose so much of their fresh taste and texture.

These cherries are not just good… they are DAMN GOOD! Try it, really, it is so worth it! 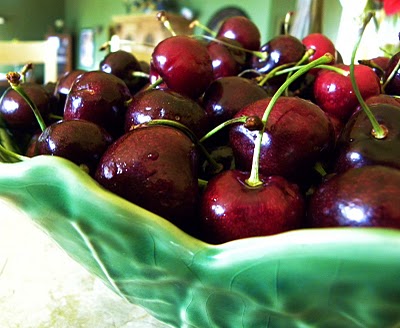 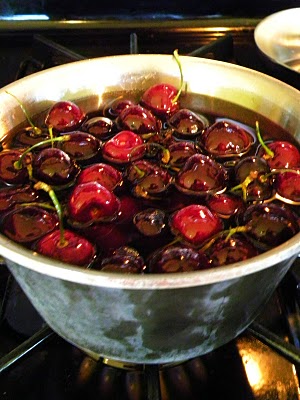 Add the cherries and almond extract. Simmer on low heat for 10 minutes or until the cherries have exuded some of their juice and the syrup has taken on a distinctly cherry flavor. Be careful not to overcook. The point is not to actually cook the cherries, but to heat them in the syrup just long enough to bring out their essence.
Remove the pan from the heat, transfer the cherries and the syrup to a bowl a container with a tight-fitting lid, cover tightly, and refrigerate. The longer the cherries steep, the more flavorful they will become.

I had my first Manhattan at the bar of Tavern on the Green (which incidentally went from being the nations second highest grossing restaurant in 2007, to closing due to bankruptcy in 2009) on my inagural  trip to New York in 1997. I ‘ve loved them ever since. I have returned to Manhattan several times since then, both in my heart and in person, I always order Manhattans when I am there.  It’s a sophisticated, strong and simple cocktail, and the ultimate showcase for as many maraschino cherries as you care to pack into your glass. The proportions are 2:1 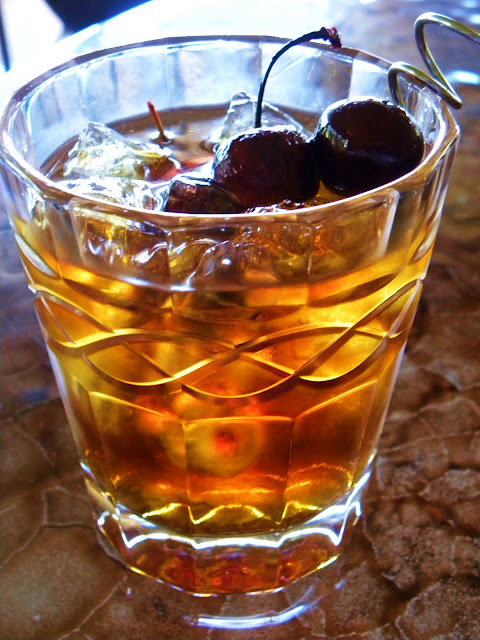 Makes 1 drink
3 ounces whiskey, rye or Bourbon
1 1/2 ounces sweet vermouth
2-3 dashes Angostura bitters
Maraschino cherries, for garnish
In a double old fashioned glass, add the whiskey, vermouth and bitters, stir. Garnish with maraschino cherries and serve on the rocks. The drink can also be served straight up by using a cocktail shaker and straining into a martini glass.