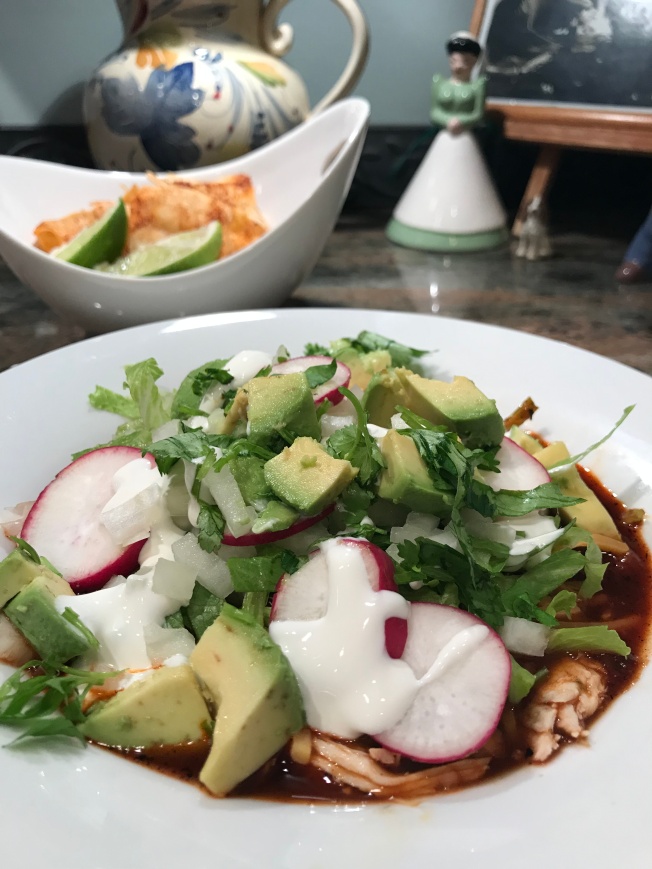 When I was in cooking school in Mexico, we went to Taxco, the “silver city” often. I had also been there many times when I was growing up. The hillside town has silver mines and many silversmiths catering to shoppers. With every visit we would go to the Pozolerias for lunch or dinner. If we were lucky,  we would be there on a Thursday we could get the Pozole Verde (green). On other days there was Pozole Rojo (red) and Blanco (white). Traditionally Pozole was made with pork. I know this is gross, but back when the Aztecs were sacrificing humans, they even used human flesh and later, pork tasted more like human flesh. Over the centuries it has developed into a regional stew with pork, chicken or even vegetarian ingredients.

Pozole is the Mexican name for treated corn, also known in the US as hominy. Since maize was a sacred plant for the Aztecs and other inhabitants of Mesoamerica, pozole was made to be consumed on special occasions. The conjunction of maize (usually whole hominy kernels) and meat in a single dish is of particular interest to scholars, because the ancient Americans believed the gods made humans out of masa (cornmeal dough).

This recipe is for the rojo pozole with chicken and it includes home made stock as well as an abundance of dried chiles. In this case I used ancho and guajillo which make a rich and delicious stew.

While this recipe is developed for the Instant Pot, it can also be made in a dutch oven or pasta pot. The cooking time will be much longer.

A note about the hominy/pozole: This can be made with canned hominy, but I suggest you take the time to soak and make your own. It will have much better texture and flavor. You can buy prepared hominy by Rancho Gordo, however, it is smaller than the kind purchased in Hispanic Markets or the kind you will make yourself.  Both will need to be soaked over night and cooked in the stock for about 30-50 minutes in the IP.  If you are cooking in a regular pot it will take 2-4 hours depending on the kind you are using. The Rancho Gordo Hominy takes less cooking time because of the size of the kernels. If you really want the original flavor you can buy large heirloom corn from Anson Mills (my favorite heirloom provider) and make your own. It is an extra step, but well worth the effort. Directions can be found here: How to make Hominy from Corn. 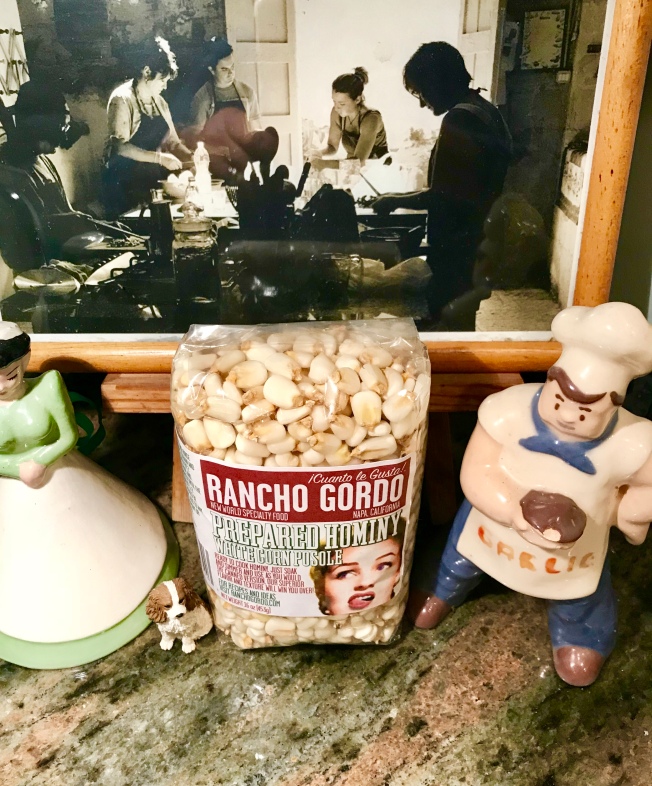 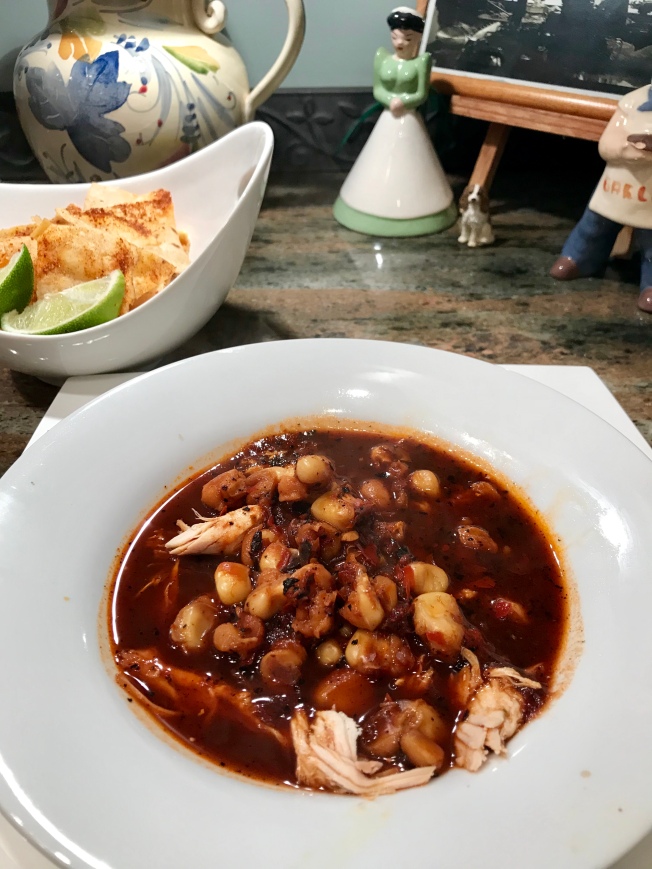 This recipe has been one I have used for years. I used to make it at my cooking school for Cuban Night. I change out a few things here and there to go more Italian or more Cuban. Even if you do not have a smoker this is delicious braised or done in a slow cooker or dutch oven. You simply make a paste in the food processor and then make slits in the pork shoulder (bone in or out, your choice). Marinate it over night, smoke the next morning and then finish it off in a crock pot or in a dutch oven in the oven.  Note: I do not add salt before cooking, but I offer it at the table.

1 cup each of packed cilantro and flat leaf parsley

1/3 cup each of coriander, cumin and fennel seeds toasted

1 tablespoon hickory powder if you are not smoking the meat

Put the cilantro, parsley seeds, garlic, pepper berries, crushed red pepper, hickory powder if you are not smoking and the olive oil in a food processor. Pulse till you have a thick paste.

Put on latex gloves if you have them, this gets messy. Cut 1 1/2 inch slits into the meat on all sides. Stuff the slits with the paste. If you have any paste left over, smear it on the meat. Wrap tightly in plastic wrap and refrigerate 12-24 hours. 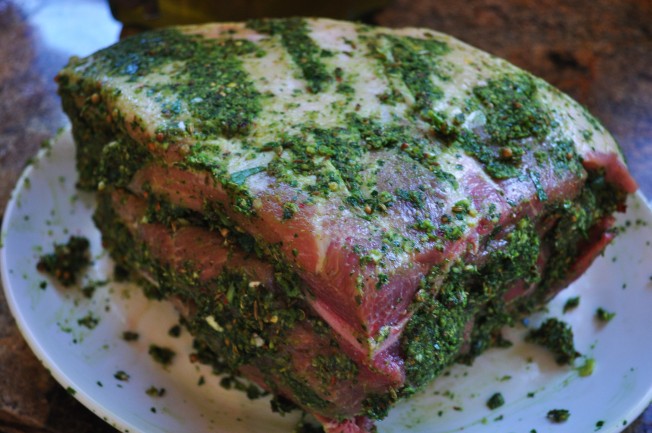 Remove the meat from the refrigerator and allow to come to room temperature. Meanwhile set up your smoker and turn your grill on high.

Sear the meat on all sides on the grill. Then place in the smoker at about 200 degrees over a drip pan and smoke for 6 hours. If you do not have a smoker, go directly to the slow cooker or roaster but cook for 8-10 hours on low.

Prepare the roaster or slow cooker by placing a bed of Yukon Gold potatoes (small ones or cut larger ones in half) and the onions. Sometimes I add other root vegetables too. Place the meat directly on the bed of veggies. pour two cans or bottles of beer over the meat. Sprinkle the sweet onion sugar all over.

Roast at 350 degrees covered with foil or in a dutch oven. Or you can use a slow cooker on high for 4 hours (either method).  It is just that easy. The leftovers are sometimes my favorite part… tamales, tacos pulled pork sandwiches. 🙂